As the leader of the Noel Freidline Quintet for the last 26 years, Freidline has recorded 8 CDs, performed at jazz festivals as diverse as the Jacksonville (FL) Jazz Festival to the Bethlehem (PA) Musikfest to the Montreux Jazz Festival in Switzerland, held down a three-year house band position at the Bellagio in Las Vegas and performed for actress Julia Roberts’ surprise 35th birthday party.  In February of 2018, Noel released his eighth album, “Old Devil Moon,” a collaboration with vocalist Maria Howell.

Noel was named Best Jazz Musician by Charlotte Magazine in 2006 and in 2009 and was named “Best Musical Director” by the Metrolina Theatre Association of the Carolinas.  A dilettante of pop culture, Noel has become a popular lecturer for theatres and museums, creating and presenting multi-media presentations on everything from Frankie Vallie and the Four Seasons to Mel Brooks.  In 2011 Freidline was chosen for the Blumenthal Performing Arts Association (Charlotte, NC) Center Stage Award in recognition of his excellence in service to the arts.  In May, 2015 Freidline was inducted into the Jacksonville Jazz Hall of Fame.

Noel has been a Lecturer in Music at the University of North Carolina at Charlotte since 2006, teaching such diverse subjects as music business, the history of rock music, jazz arranging, music theory and ear training, and directing the UNCC jazz combo’s and vocal jazz ensemble.

Freidline performs monthly as part of the Ziad Jazz Quartet for Jazz at the Bechtler, a very successful monthly jazz series put on by the Bechtler Museum of Modern Art, Charlotte, NC.

In August of 2013, Freidline was brought on as artistic director by the Columbia (SC) Museum of Art to create a jazz concert series.  January of 2014 Freidline launched Jazz on Main, the CMA's newest concert series, with the series now regularly selling out.

As a composer and arranger, Noel has written and recorded music for ESPN, ABC and the Walt Disney Company, with his most recent work being featured on Monday Night Football, the NBA All-Star Game, and SportCenter.    In March, 2012, Noel completed an artist-in-residency program as a teaching artist with the education department of the Charlotte Symphony, composing and conducting several pieces for the Northwest School of the Arts (Charlotte, NC) orchestra and band.

A native of Clearwater, KS, Noel has resided in Charlotte, NC with his family since 2003. 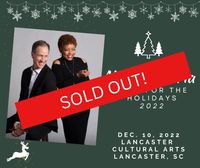 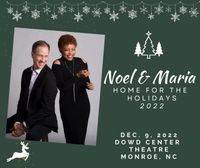 Join Noel Freidline & Maria Howell as they celebrate the season with their annual Christmas show “Noel & Maria: Home for the Holidays”. On the heels of their 2019 release “Merry Christmas My Dear”, Noel & Maria are joined by an all-star ensemble as they reinterpret Christmas classics as well as contemporary holiday favorites such as “Have Yourself a Merry Little Christmas,” “Sleigh Ride,” “Here We Come A’Wassailing,” and “God Rest Ye Merry Gentlemen” (with a ‘Dave Brubeck’ twist!), and many many more!

Tickets not on sale yet. Please check back! 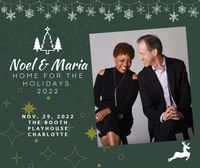 Join Noel & Maria for their 3rd annual holiday show "Home for the Holidays 2022". On the heels of their 2019 release “Merry Christmas My Dear”, Noel & Maria reinterpret Christmas classics as well as contemporary holiday favorites in an intimate cabaret setting. Along with their all-star band Noel and Maria will be joined by special guest violinist Karen Briggs (Yanni, Spyro Gyra, SpecialFX). Tickets go on sale the middle of Oct. 2022.