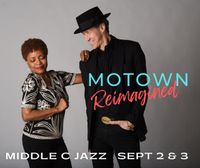 27 number 1 hits, over 60 top 10 hits. Motown had so many hits that one could put together five separate shows of their music and still have plenty of songs left over. The exemplary songwriting of Smokey Robinson, Holland/Dozier/Holland, as well as Berry Gordy himself, along with the interpretation by such legends as Marvin Gaye, The Temptations, Diana Ross and the Supremes and many more has left us with a repertoire that is prime for reinterpretation. Join Noel & Maria as they reinterpret and reimagine the music that defined the 60’s, the Motown Sound!