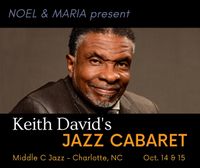 KEITH DAVID Keith David is a classically trained actor, winning 3 Emmys out of 6 nominations as well as being nominated for a Tony award. He starred in the recently concluded tv series "Greenleaf" for Oprah Winfrey's OWN network. He co-starred with Chadwick Boseman in "21 Bridges" which was in theaters last year. He will be in theaters this year in "Horizon Line" with Allison Williams ("Get Out"). “Black As Night,” an anthology series, features Keith and will be on Amazon sometime next year. In addition to his versatile acting and voiceover work, Keith is also a remarkable singer. Previous tour include, “Too Marvelous for Words”, a tribute to the legendary singer Nat King Cole, and a tribute to Joe Williams, “Here’s to Life.”